The luminous process of luminescent materials is the process of converting absorbed energy into light radiation. It is another kind of radiation besides thermal radiation, and the duration of this radiation is greater than that of light.

The production process of the luminescent materials can be referred to the Luminescent tape.

The definition of luminescence

This definition of luminescence consists of two parts:

It is necessary to ascertain whether a material is emitting without obvious boundaries. Under general excitation conditions, the material that does not luminescence also has weak luminescence under very strong energy excitation.

Materials that can glow under various forms of energy are called luminescent materials (or phosphors).

A cathode ray luminescent material excited by an electron beam;

An electroluminescent material that is excited by an electric field;

A chemiluminescent material that causes luminescence by a chemical reaction between two or more than two chemical substances;

A radioluminescence material that is irradiated by natural or artificial radioactive materials.

Considerations for the purchase of reflective materials for reference: How to buy Photoluminescent Tape

Some cathodoluminescence phosphors, such as radar phosphors, also have long afterglow after cathode ray ceasing. These materials contain sulfides and some fluoride. The afterglow time is longer than 1s, even up to 30s.

Luminescent phenomena and luminescent materials have played an important role in the national economy and people’s lives.

A brief history of luminescent materials

The earliest records of the luminescent materials in the West were in the jewels inlaid on the goods operated by the Italy Poloni shoe store.

The gemstone is made by calcining of ore and carbon, and it can be glowing in the dark. It was very precious at that time.

In 1603, the Italian man, Casciarolus, got some red minerals in the dark when he roasted the gold in the local ore.

Then by the analysis of barium sulfate containing components of stone, by reduction roasting may become a part of barium sulfide, which is in fact after artificial preparation of barium sulphide storing type luminous material.

In 1609, Brand discovered the substance that gives white light in the air. It named it “phosphors”. Since then, inorganic luminescent pigment is called phosphor, sometimes it is also called luminophor.

There are two kinds of luminescence: phosphorescence and fluorescence.

Phosphorescence is derived from phosphor. It refers to the phenomenon of long duration of light after excitation and stop. The light from long afterglow material is a typical phosphorescence.

From 1600 to 1700, many people, including Goethe, studied the luminescence of noctilucent materials.

Therefore, the light emitting materials are the first kind of luminescent materials to be found and applied.

A systematic and scientific study of inorganic phosphors began in nineteenth Century. In 1852, Stokes and Becquerel, Verneuil and Lenard defined the first fluorescence definition and published the famous Stokes law.

At Sidot in 1866, the luminescence of ZnS was discovered, and since then, ZnS has become the basis of many important industrial phosphors.

On the basis of the study of uranyl salt in 1867, two kinds of afterglow mechanism were deduced, that is, the Hyperbolic Attenuation and exponential decay.

In 1887, Verneuil realized that heavy metal impurities played an important role in the luminescence of inorganic substances.

In 1898, Mr. and Mrs. Curie extracted radium from uranium and radium bitumen, and radio luminescence materials began to be applied in all aspects.

In 1903 and 1904, Lenard and Klatt reported the relationship between activator and luminescence, first using flux and discussing its effect.

Before 1970s, there had been no reports of non sulphide light storage materials.

After that, though there were some brief descriptions about the long afterglow properties of aluminate system, it was not until 1990s that the aluminate system luminescent material with better optical storage property than sulphide was launched.

As soon as this new material is published, its excellent light storage performance has been recognized by people and is known as the second generation of light emitting materials.

For photoluminescence materials, the ultraviolet energy of the excited material can be absorbed by the matrix (also called intrinsic absorption).

The matrix absorbs energy, and its luminescence can be directly generated by the recombination of valence band electrons and holes, and it can also be generated by the luminescent center formed by lattice defects or impurity defects.

Therefore, in the process of absorbing energy, transmitting energy and emitting light, the composite luminescent material is lost and the efficiency of energy luminescence is low.

The elements which are used as activators to form the center of luminescence are mainly transition elements, rare earth elements and mercury like elements. The luminescence process of the 5 materials is simpler than that of the composite material. The luminescence center directly absorbs the excitation energy, and the concentration is only a few percent. The energy between the center and the substrate is low, so that the material has high luminous efficiency.

A schematic diagram of the luminescence process, as shown in Figure 1: 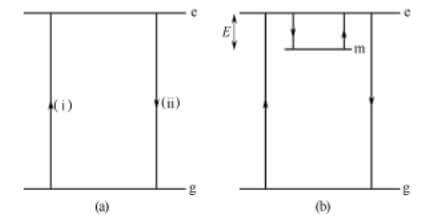 When the excited electrons return to the ground state by photon emission, i.e. Figure 2 (a) in the process of transition (II).

The fluorescence transition (I) and (II) the time interval between less than 10-8s, and this process is independent of temperature.

If in the excited state of “e” and “g” between the ground state energy gap “exists in the” metastable “level” m “[see Figure 2 (b)], the energy level diagram structure has changed from” g “, the electronic excitation to the” e “may be bound in the metastable state of” m “so, until the” m “from” e “to return to gain enough energy to reach E level,” e “will be able to return to the normal electronic transitions of G”, accompanied by light emission.

In this way, the delay time of the phosphorescence is in fact corresponding to the time that the electron stays in the trap “m”.

The light storage properties of the sulphide series and the aluminate system luminescent materials are related to the trap energy levels of different depths in these materials.

When ultraviolet light is excited, a trap energy with a certain depth of energy has captured a sufficient number of electrons from the excited state and stored.

There is an urgent expectation that materials that can glow for a long time and do not contain radioactive materials will come out as soon as possible. This expectation cannot be achieved by the series of sulphide light storage materials.

Europe was the leader of phosphor technology and industry before World War II. After the Second World War, the United States surpassed Europe, and after 1980s, Japan began to gain the advantage in this industry. China has been catching up with Japan in recent years, and has made great progress in some aspects. It occupies the world advanced level in the research and industrialization of new light storing luminescent materials.

The application fields of new light storage luminescent materials are very extensive. They are widely applied in the fields of building decoration, transportation, military facilities, fire safety, daily life products and so on, and form the luminous industry chain. The market prospect is broad at home and abroad. Especially in the field of fire safety which is related to the safety of the people’s life and property, it plays an important role.

In September 2002, the American “Newsweek” in the “9 – 11” 1st anniversary with the theme of “Five Who Survived”, reported the survivors escape insider, which is making use of the Glow In The Dark Stairs with the nose and dark corridor in the building after the evacuation instructions in smoke.

The luminescent material is applied not only to the safety mark, but also to the thermal transfer printing, which can be used as a reference to the Luminous Heat Transfer Vinyl. 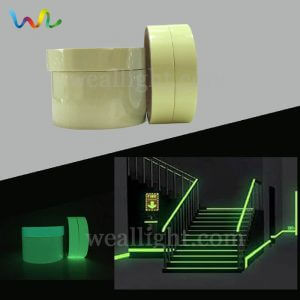 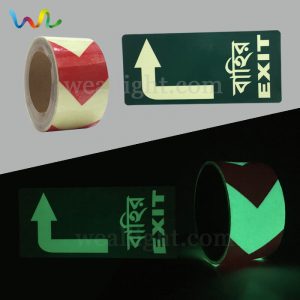 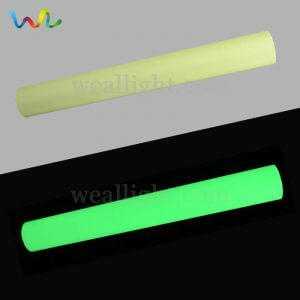